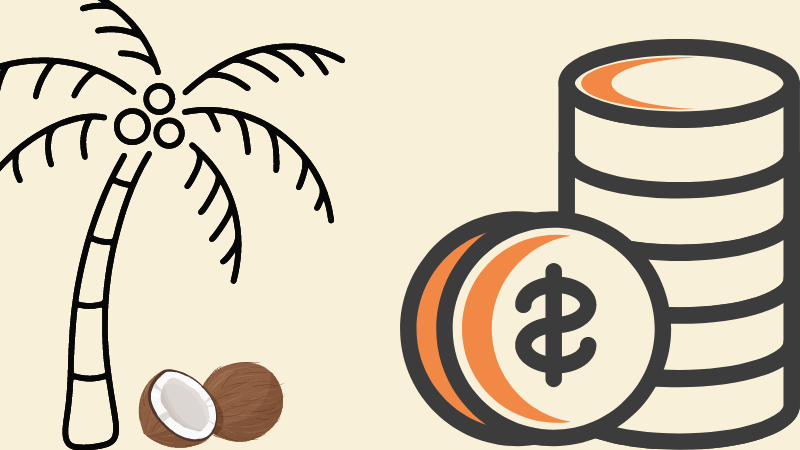 Globally, India ranks third in coconut and coconut oil production. Philippines and Indonesia take the first two positions. The previous part of copra or coconut oil global commercial aspects covered the global supply and trade of copra, coconut oil and their prices. This Part 2 presents export data of major coconut products from Philippines and Indonesia as well as ASEAN countries together. Also, the details about the international trade in coconut products for USA are also presented. Although somewhat older, i.e., for the year 2015, the data on area under coconut cultivation, coconuts production and productivity in major coconut producing countries, are presented, which may be useful for comparison.

The following table lists area, production and productivity coconut in major coconut growing countries of the world reported for the year 2015.

Exports of coconut products from Philippines during 2018, 2019 and 2020 (quantity and value) are presented in the following table, along with their HS codes.

The following table presents exports of various coconut products from Indonesia (quantity and value) during the years 2018, 2019 and 2020.

Comparison of exports of same products from a country during consecutive years 2019 and 2020 may not be proper due to the global corona virus pandemic. There are significant variations in the export data of most of the coconut products from 2019 to 2020 due to several different factors.

Since coconut is more prevalent in the coastal regions of Asian countries, it would be interesting to analyze the historical coconut oil trade data from ASEAN countries, which include Brunei Darussalam, Cambodia, Indonesia, Lao PDR, Malaysia, Myanmar, Philippines, Singapore, Thailand and Vietnam. The following table presents exports and imports of coconut oil and cake of coconuts from and into ASEAN countries during the period 2009 to 2018, in value terms (US $).

TABLE 4: COCONUT OIL AND CAKE OF COCONUTS EXPORTS AND IMPORTS OF ASEAN COUNTRIES (2009 TO 2018)

The following table presents ASEAN exports of coconut oil to the top three markets along with their market shares for the period 2015 to 2018.

Benefits of technical audit of a process plantFive trending innovations in the oils and fats processing industry to look for in 2022.  