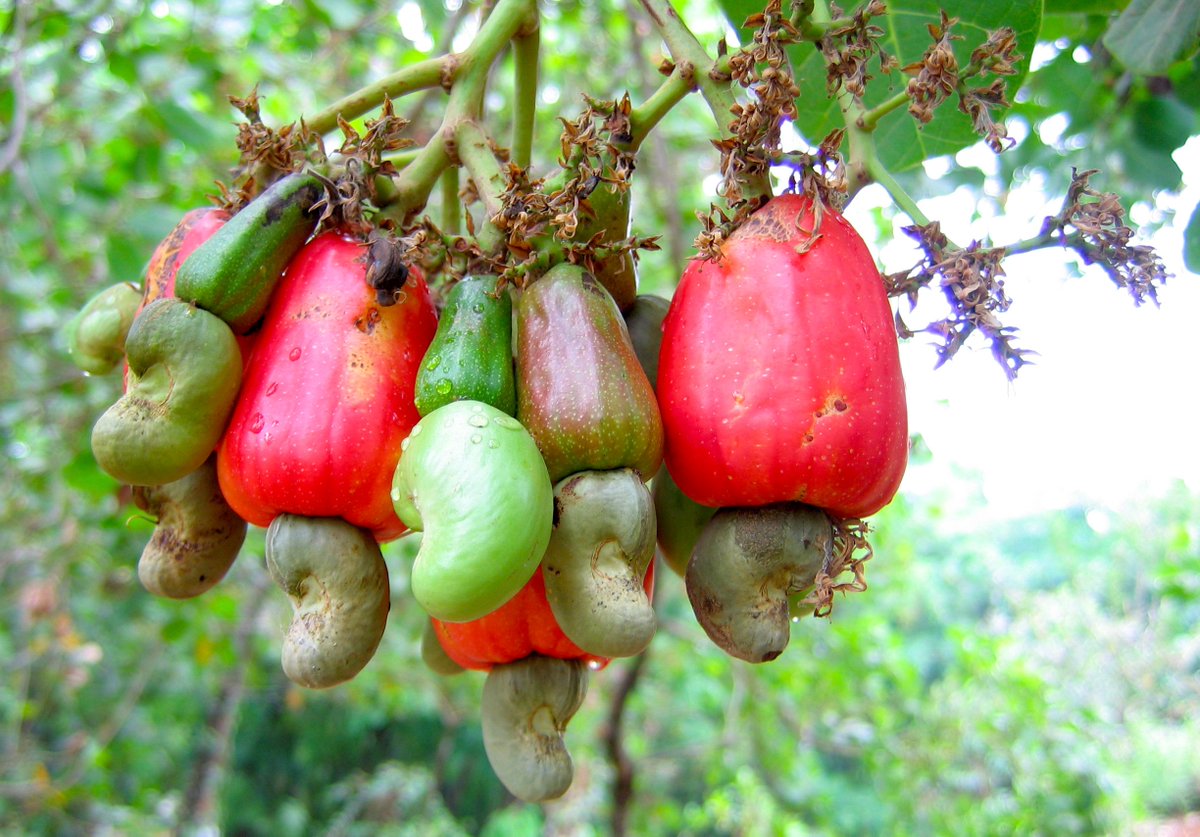 The shell of the popular dry fruit, cashew nut, is an important source or the starting material for several specialty chemicals. Cashew nut shells are used to produce cashew nut shell liquid, known in short as CNSL.

The present paper presents an overview of properties, components of cashew nut shell liquid (CNSL) and its manufacturing processes.

Cashew trees are cultivated in the tropical regions and are well-adapted to low-land areas with a pronounced dry season, where the mango and tamarind trees also thrive. Traditional cashew trees are tall (up to 14 m) and their economic harvests begin eight years after planting. The recent breeds such as the dwarf cashew trees (up to 6 m tall) begin to give economic yields after three years. The cashew nut yields for the traditional tree are about 0.25 MT per hectare, while yields for the dwarf variety are more than one tonne (1 MT) per hectare.

Cashew tree is a tropical green tree and has the botanical name Anacardium occidentale. The tree produces cashew seed and the accessory fruit, cashew apple. This means, the cashew seeds is not present inside the fruit, cashew apple, but outside it. In botanical terms, some of the flesh of accessory fruit is derived from some adjacent tissue exterior to the carpel and not from the floral ovary. It is also known as pseudocarp or false fruit. This cashew apple is an oval or pear-shaped hypocarpium that develops from pedicel and the receptacle of the cashew flower. It ripens into a yellow or red fruit about five to eleven cm (2 to 4.3 inches) long. The top end of the cashew apple is attached to the stem of cashew tree. The bottom end of the cashew apple is attached to the cashew nut encased in a shell. The cashew apple is light reddish to yellow coloured, soft and fleshy fruit, whose pulp and juice can be processed into a sweet, astringent fruit drink or fermented and distilled to produce liquor.

The true fruit of cashew is a kidney-shaped drupe that grows at the end of the cashew apple. This drupe first develops on the tree and then the pedicel expands to become the cashew apple. This drupe or true fruit of cashew contains a single seed, which is often considered a nut. This seed is surrounded by a double shell that contains an allergenic phenolic resin, anacardic acid – which is a potent skin irritant. The shell can cause contact dermatitis similar to poison ivy, due to the presence of phenolic lipids, anacardic acid and cardanol. Therefore, usually, cashew nuts are sold to consumers only after removal of these shells. As these substances are skin allergens, they are dangerous in manual processing of cashew nuts.

Cashew nut has two shells (double shell) or walls, the outer one being smooth and somewhat elastic and olive green in colour before maturity. When the cashew nut matures, the outer shell becomes grayish-brown. The inner wall or shell is harder and needs to be cracked to remove the nut inside. The honeycomb structure is housed between the inner and outer shells. The nut or kernel inside the shell is covered with a brown skin known as testa. The kidney shaped nut varies in size from 2.5 to 4 cm. Cashew nut shell liquid has a reddish-brown colour due to charring as well as chemicals changes during frying.

The cashew seed shell is separated to give cashew nut. This shell is of about 1/8th inch in thickness. The soft honeycomb structure of the shells secretes a dark reddish brown viscous oily liquid. The shells separated from cashew nuts are processed to give CNSL, and is thus a byproduct of the cashew processing industry.

As a result of large scale commercial cashew plantations, CNSL is available in many countries across the world. Also, many countries import raw cashew nuts for processing, thus, producing CNSL as a byproduct. Countries and regions such as India, Brazil, Bangladesh, Tanzania, Kenya, Mozambique, tropical regions of Africa and South-East and Far-East Asia, produce cashew nuts and CNSL in abundant quantities.

The resinous oil obtained from cashew nut shells is used to produce several derivatives which have diverse applications including paints and coatings, lubricants, waterproofing as well as specialty chemicals. Cardanol, an important component of cashew nut shell liquid, can be extracted from the shells readily and inexpensively.

The cashew nuts are commonly eaten directly or used in various recipes – salted, spiced, or even processed to give cashew cheese and cashew butter.

Cashew nut shell liquid (CNSL) is dark viscous oil with a characteristics smell, very much unlike other vegetable oils. It is an oily natural resin with a yellowish sheen. It is opaque and when applied as a thin film, it is reddish-brown in colour. Industrial grade CNSL is reddish-brown in colour. It is immiscible with water but is miscible with most organic solvents.

CNSL has germicidal and fungicidal properties.

Commercial grade CNSL contains hardly any anacardic acid due to decarboxylation during the roasting process, which converts anacardic acid to cardanol. This roasting process also results in polymerization, which accounts for 20 to 25% polymeric substances in CNSL. Raw CNSL is corrosive but becomes less so by decarboxylation and removal of hydrogen sulfide (H2S) during the refining process. 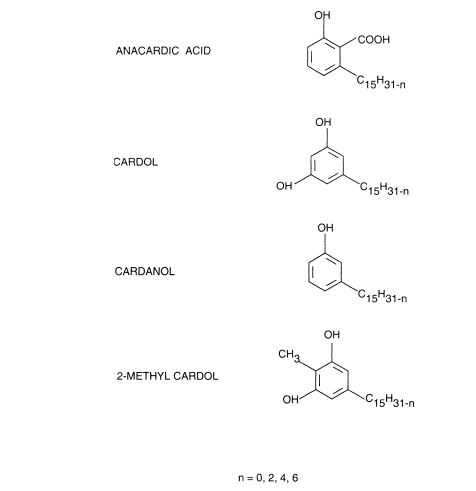 The chemical structures of various components enable CNSL to take part in a large number of chemical reactions. The phenolic nature of these constituents, along with varying degrees of unsaturation in the side chains, make it a highly polymerizable substance amenable to a variety of polymerization reactions. Of overriding importance, however, is the condensation reaction with active methylenes that formaldehyde exemplifies. This leads to a phenol-formaldehyde type condensation.

Cashew nut shell liquid constitutes about 20 to 25% of the weight of the cashew nut. A number of different methods are employed to extract CNSL from cashew nuts. The popular methods of manufacturing CNSL are given below in brief. Many a times, a particular region follows a particular manufacturing technique by convention rather than by deliberate choice.

Additional 20% of the remaining CNSL could be extracted by passing the spent shells from the above process through an expeller and the rest by a solvent extraction technique. The CNSL obtained through expeller can be upgraded by acid washing followed by centrifugation and heating treatment.

The raw or crude CNSL obtained using the above extraction methods is refined to produce commercial grades.

During refining, raw CNSL is treated with materials like hydrocarbon sulphates and sulphuric acid to remove unwanted materials like sulphides, nitrogenous materials and minerals. Aqueous solutions of acids such as hydrochloric acid, sulphuric acid, acetic acid, chloroacetic acid or phosphoric acid, or acid sulphates such as sodium hydrogen sulphate are used for refining of crude CNSL. This refining process results in evolution of hydrogen sulphide, and reduces the chemical components or agents in CNSL responsible for skin irritation.

The refined CNSL can be readily distilled under vacuum. Alternatively, it can be hydrogenated to give refined CNSL with good colour stability. Deodorization may be effected by steam treatment of sulphuric acid treated CNSL by distillation.

Typical properties of raw CNSL and treated CNSL (i.e. before and after chemical treatment) are presented in the following table.

I want to know about cnsl .

Thank you for reaching out to us.

What exactly would you like to know about CNSL ? Applications, extraction or general properties of CNSL Shell / Liquid ?

Hello!! Is this CNSL oil is toxic for environment??

Five trending innovations in the oils and fats processing industry to look for in 2022.  Cashew Nut Shell Liquid (CNSL) – Specifications And Applications