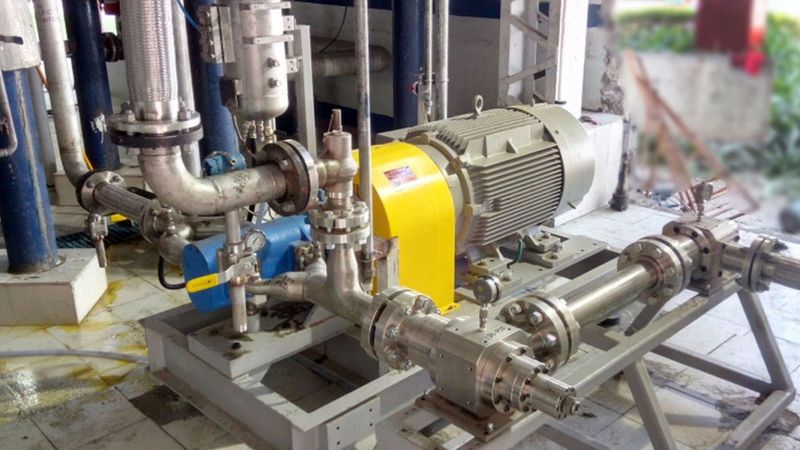 CFC™ (Controlled Flow Cavitation™) is a patented technology from Arisdyne System USA that enhances the neutralization process in refining operations. This groundbreaking technology can be easily added to the existing or new refineries. It is commercially proven and delivers a quicker route to ROI.

Hydrodynamic cavitation can occur in any turbulent fluid by increasing the speed of the fluid. This results in reduced pressure and, in turn, reduces the steam pressure. The low pressure vaporizes the fluid forming the bubbles of the cavitation. Small amounts of steam are released at the extremities of this physical phenomenon forming smaller bubbles, from 100 nm to 3 mm in diameter, which implodes under the high pressure that surrounds them. Cavitation is this process of formation and collapse.

Process of CFC™controlled cavitation for neutralization.

Crude (or water degummed) oil is pumped from storage through a safety filter and a mass flow totalizing flow transmitter. It is taken into a small Buffer tank at a desired process flow rate via an inline static mixer. Here, Phosphoric acid injected into the oil, which is retained in the buffer tank for 10 -15 minutes.

Once the oil and caustic water solution has passed through the CFC™ it proceeds to the retention buffer tank. It is held for 5-10 minutes before being sent to the centrifugal separator. After the centrifugal separator, the light phase neutralized oil passes through a new mass flow totalizing flow transmitter, which measures the refined oil yield. From there, it flows on to the silica absorption (or water wash) system to remove residual soap.

Uncontrolled cavitation is a very destructive force. The CFC™ system is designed to produce only controlled cavitation in optimum process conditions also protect your equipment from damage. CFC™ systems are designed to last longer using static versus dynamic configuration. There are no moving parts in the device. There are several other benefits from using Arisdyne's CFC™system:

Enhanced oil conditioning in the CFC™ leads to better separation efficiency of the heavy phase from the light phase in the centrifugal separator. This results in a lot less neutral oil remaining in the heavy phase, thereby increasing overall oil yield from 0.1 to 0.3%.

Conditioning oil in the CFC™ system converts most of the NHP (non-hydratable phospholipids) to a hydratable form, as a result of which usage of phosphoric acid drops by about 50-90%.

Oil conditioning CFC™ system leads to better separation efficiency of the heavy phase from the light phase in the neutralizing centrifugal separator, which significantly reduces residual soap in the heavy phase to <175 ppm.

Why it imperative to innovate in the edible oils processing industry
Some of the trending innovations in the oils and fats processing industry in 2022
Here are the 5 questions you should ask before setting up an edible oil refining business
Explore the processing, uses and specifications of Soybean Oilseeds, Oil & Meal