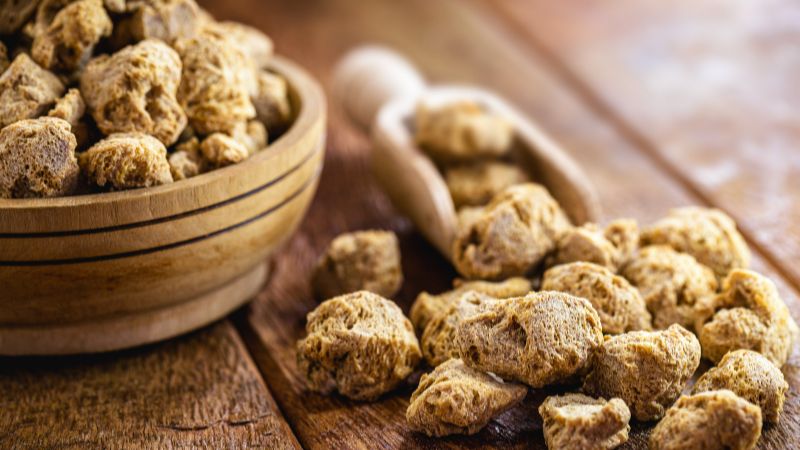 The following table presents area harvested, production and productivity of soybean in India during the past several years.

Food grade or edible soybean protein isolates are produced by aqueous extraction of soybean flour, at a pH below 9. The aqueous extract is filtered or clarified to remove the insoluble material. Then it is acidified to a pH between 4 and 5. The protein is precipitated in “curd” form and is separated from the whey by centrifuge. This protein “curd” is then neutralized with alkali to obtain the sodium salt of soybean protein, called as sodium proteinate salt. It is then dried to produce the soybean protein isolate powder.

According to the standard, these soybean protein products may contain several other optional ingredients such as, carbohydrates including sugars, edible fats and oils, other protein products, vitamins and minerals, salt, herbs and spices.

Pure soybean protein isolates are also available in pharmacies as a part of nutritional formulations along with other food ingredients.

Soybean protein concentrates are widely used as functional or nutritional ingredients in a wide range of food products, mainly in bakery products, breakfast cereals, and in some meat products. They are used in meat and poultry products to increase water and fat (oil) retention and to improve nutritional values, i.e., to increase the protein content and reduce the fat. Soybean protein concentrates are very digestible and therefore are well-suited for children, pregnant and lactating women and the elderly people. They are also used in milk replacements, pet foods, as well as in some non-food applications.

Animal feed grade soybean protein generally has a protein content of about 65%, and is specially formulated for pigs, cattle, fish, and pet foods.

The largest use of industrial grade soybean protein is in paper coatings. Soybean protein is used for emulsification and texturising. It is also used in adhesives, asphalts, resins, cleaning materials, cosmetics, inks, paints, leather, pesticides and fungicides, plastics, polyesters and textile fibers.

Interestingly, people throughout East Asia have consumed soybeans for more than 2000 years in the form of traditional soybean foods, such as nimame (cooked whole soybeans), edamame (green fresh soybeans), soybean (or soy) milk, tofu, kori-tofu (freeze-denatured and dry tofu), abura-age (deep-fat-fried tofu), sufu or tofu-yo (fermented tofu), soybean (or soy) sauce, miso, natto, tempeh, etc. In Western countries, soybeans attracted attention only in the 1960s as an economical and high quality vegetable protein source for humans. Much higher quantities of raw soybeans are consumed in East Asia through preparation of traditional products as compared to those in the Western countries, where the soybean-based products are mainly made from the derivatives of soybean, such as soybean flour, protein concentrates or isolates. Confirmation by the US FDA of the soybean protein health claim, i.e., ‘25 g of soybean protein a day may reduce the risk of heart disese’, has probably boosted the consumption of soybean-based food products in the western countries as well as the world over.

Textured soybean protein (TSP) is produced by forming a dough from highly soluble (i.e. having high NSI) defatted soybean flour or soybean protein concentrate with water in a screw type extruder, and heating with or without steam. The dough thus formed is extruded through a die while still hot, to obtain various shapes – granules, flakes, nuggets, grains, strips, chunks, goulash, etc. These shapes are then dried in an oven. The sizes of the TSP also differ.

Generally, TSP is produced by heating the soybean flour or concentrate to about 150 to 200 deg. C, which denatures the protein into a fibrous, insoluble, porous network that can soak up as much as three times its weight in liquids. As the pressurized molten mixture comes out of the extruder, the sudden pressure drop results in rapid expansion of the protein into a puffy solid in the shape of the die. It is then dried as mentioned earlier.

As the structure of the soybean protein changes to a fibrous, spongy matrix similar in texture to that of meat, during the extrusion process; textured soybean proteins are used to replace meat. A wide range of food products with these meat-replacing TSPs are available in the market, globally. Shelf life of dry TSP is more than a year at room temperature but the rehydrated TSPs need to be consumed immediately or within three days, if stored in a refrigerator.

It must be noted here that similar products, i.e., textured vegetable proteins, can be produced from other raw materials, such as oats, wheat and cottonseeds.

Textured soybean protein (and other textured vegetable proteins) is commonly used as meat substitutes due to its lower cost at less than a third of the price of ground beef. When cooked together, TSP helps retain more nutrients from the meat by absorbing juices which are normally lost. Many a vegetarian or vegan versions of traditional meat-based dishes are made using textured soybean protein.